Unlike many years past, the men’s competition at the 2015 U.S. Figure Skating Championships began without a clear ­cut favorite. Between skaters just coming off of the triumph and disappointment of an Olympic cycle and those just coming up from the junior level and trying to leave their mark, the field was wide open and provided the opportunity for anyone to take the lead.

From the first warm­up group, it was clearly evident that every skater was looking to leave an impact on the national level, but ultimately, it was Jason Brown, Joshua Farris, Jeremy Abbott, Max Aaron, and Adam Rippon, who were able to capitalize most on the opportunity of the event. Brown skated a crowd­pleasing and intricate short program to Little Walter’s “Juke” and scored a personal best 93.36 to take the top spot heading into the free skate.

“I’ve been feeling extremely confident and very consistent this past month leading up to nationals. I’ve really been training consistency,” Brown said, “Four years ago it was my first senior nationals at Greensboro and I have the absolutely best memories from here ­ the crowd, the people, the fans, the people who worked behind the scenes. It was all just about coming back and having all those great memories.”

Farris, who had struggled with a high ankle sprain that forced him to withdraw from the Cup of China earlier this season, came back stronger than ever with a beautifully lyrical rendition of Ed Sheeran’s “Give Me Love,” which earned him a 90.40, which is a new personal best for him.

“I was shocked, no idea it would be that high,” Farris said of his score, “I feel so great right now. It’s nice to know I have support; this whole year I felt self­ deprecating and defeated, so the fact that I can still get that score is nice to know and will definitely motivate me in the future.”

Abbott entered these U.S. Championships as the four-­time champion after making the  decision after last season’s  World Championships to continue his skating career. His moving performance of Sam Smith’s “Lay Me Down” brought the crowd to its feet and harkened back to the form he displayed earlier on in his career at Nationals. Abbott, sadly, lost his father several weeks ago and he was able to channel that emotion beautifully to create a powerful short program.

“I was really happy,” Abbott said of his performance, “The goal for me this week was to skate solidly, be my best and move onto Worlds. I always have a tendency to be out of this stratosphere at Nationals, so this time it’s move ­on, get through it and get to Worlds.”

Aaron came into Greensboro after missing out on an Olympic berth in 2014 and showed a new expressive side of his skating while still showcasing his iconic powerful jumps in his “Footloose” short program, which garnered him an 85.78. “I’ve really had a hard time competing in the last year and half,” Aaron admitted after his skate, “My mind hasn’t been where I want it to be when I’ve stepped on to the ice, but it felt good to be out there today and I kept my mind sharp. I had a couple of silly errors, but I’m glad I rotated everything, stayed on my feet and had some fun out there.”

Rounding out the top five was Adam Rippon, whose massive quadruple Lutz attempt left the crowd stunned. His “Nyah” program built off of the quad and put him in a position to challenge for a medal in the free skate.

“I feel outstanding,” Rippon enthused, “I don’t think I have ever been in as good of shape as I am now, and I thank all of my coaching staff who are here with me today. I’ve lost weight since the Grand Prix and I feel really fit. The quad Lutz wasn’t perfect today. I thought why not go for it? What if I get to Four Continents or Worlds and everyone else is doing it and I’m trying it at the last minute. I wanted to go right into the fire. I am glad I went for everything today. I want to exude the confidence of a champion. I want to use this feeling heading into the free skate Sunday.”

2014 U.S. Junior Champion and Jr. World Bronze Medalist Nathan Chen made his senior debut and finished with a 76.20, putting him in eighth place. Following his short program, Chen was seen limping around. When asked about it, he said his left heel started hurting last Wednesday.

“It came out of nowhere,” Chen explained.  “I just stepped onto the ice and it started hurting.”

Figure Skaters Online’s Grant Hochstein and Douglas Razzano finished the short program in the top 10, with scores of 75.70 and 74.01 respectively. Sean Rabbitt had his best short performance ever, finishing with a 71.39. He is sitting in 11th place. Alexander Johnson, who returned to nationals after taking a year off due to injury, earned a 68.46 and is behind Rabbitt in 12th place. 2014 U.S. Junior silver medalist Jordan Moeller, who made his senior debut, is in 14th place with a score of 67.81.

FSO is delighted to note that 10 of the 20 skaters competing in this years men’s field are represented online through the FSO website service, and would like to congratulate all of the competitors and wish them well in the free skate on Sunday. 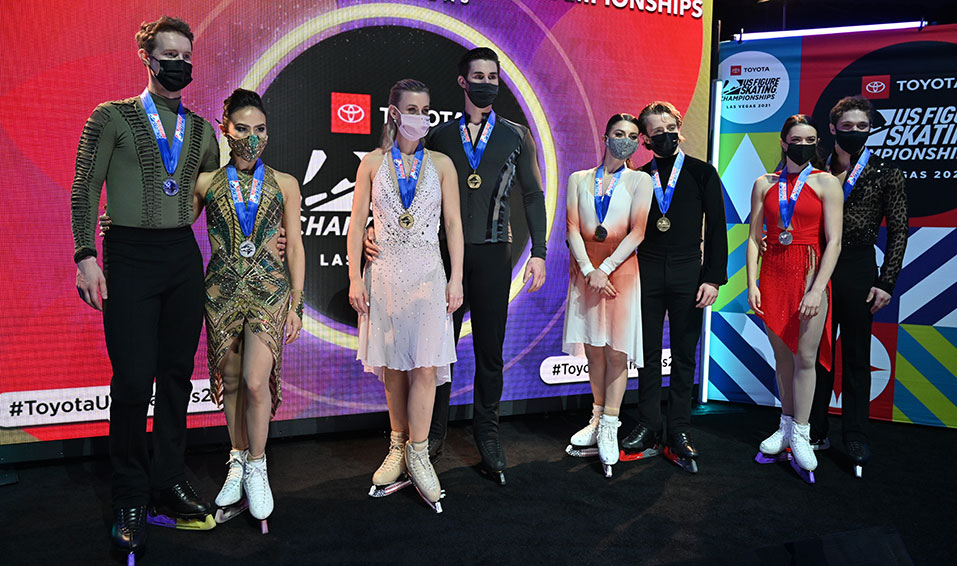