At the end of last season, many were already calling Evgenia Medvedeva the next Olympic Champion. The 18-year-old had a perfect season and hadn’t lost an event since 2015.

Fast-forward to the beginning of the 2017-2018 season, where a foot injury kept the two-time World Champion from Russia out of the Grand Prix Final and Russian Nationals. While she was off the ice, another Russian teenager was quickly filling her void and becoming someone who could challenge Medvedeva for the gold in PyeongChang.

In her first season as senior lady, Alina Zagitova was already turning heads when she won both her Grand Prix events, the Grand Prix Final and became the Russian National Champion. When Medvedeva returned to competition at the European Championships, it was Zagitova, the World Junior Champion, who edged out the her training mate for the title.

On Wednesday, the two went head-to-head in the short program at the 2018 Winter Olympics Games. Once again, it was Zagitova who came out on top, heading  into Friday’s free skate with a slight advantage over Medvedeva. In her short program, Zagitova executed a rare triple lutz-triple loop combination, a triple flip and double axel. Zagitova set a personal best and world record short program score of 82.92 points to lead the ladies’ field into the free skate.

“I was very happy when I saw the score, but I did not expect it. Now my name will connected to that record,” the 15-year-old said.

Zagitova had broken the world record short program score set by Medvedeva just a few minutes earlier. Medvedeva delivered an outstanding performance that included a triple flip-triple toe combination, a triple loop and double axel. The two-time World Champion earned a personal best score of 81.61, which was a world record score until it was topped by Zagitova.

“Today, I felt better than in the team event, but I still could have had a higher score if the (jump) combination would have been better. The analysis starts already during the performance,” Medvedeva noted. “I’m trying not to think about medals. My main goal is to show a clean free skate and to be satisfied with performance inside,” the 18-year-old continued.

Both Zagitova and Medvedeva are coached by Eteri Tutberidze and train in Moscow.

Canada’s Kaetlyn Osmond finished third behind the Russian teenagers in the short program. The World silver medalist and Olympic gold medalist in the team event at PyeongChang delivered a clean short program, nailing her triple flip-triple toe combination, a triple Lutz and double axel. She earned a personal best of 78.78 points.

“It means so much. I have been fighting to keep this program and improving it at each event. I was a little upset after the team event short program, but to come out here, not long afterwards and do this program and do a personal best and season’s best it’s really important to me,” the 22-year-old shared.

Japan’s Satoka Miyahara and Kaori Sakamoto finished in 4th and 5th respectively and are still contenders for the podium.

“I wanted to be more expressive and more open. And I hope I can do that in the free program,” Miyahara noted. “I thought I would be more nervous. It was not so bad for me. It was very special and on this dynamic stage and I am happy to skate here.”

It was a tough short program for the Team USA ladies. All three ladies struggled with their opening jump. After executing a clean triple axel in the team event and becoming the first U.S. lady to do so at the Olympics, Nagasu overrotated the difficult element and fell. She was able to recover to complete her triple flip-triple toe combination and her triple loop and is currently in 9th place with a score of 66.93.

“This isn’t what I wanted, but you can’t always have what you want and I’m so incredibly proud of myself for taking that fall and continuing the rest of the program and getting every element done.

2017 U.S. Champion Karen Chen put her hand down on her triple lutz jump and wasn’t able to execute the triple toe of the planned combination. She attempted to put the triple toe onto her triple loop later in the program, put managed only a double toe. She scored a 65.90 and is in 10th place behind Nagasu.

U.S. Champion Bradie Tennell, who was the first skater of the night, fell on her triple toe, of her triple lutz-triple toe combination. She is in 11th place with a score of 64.01.

“My timing was just a little off and my left arm got a little away from me, so I wasn’t able to get the snap,” Tennell said about the fall. 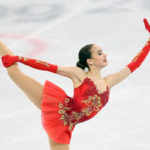 Enter to win two free tickets to the European Championships