The International Skating Union (ISU) announced that the European Figure Skating Championships have been cancelled due to the coronavirus pandemic. The event was scheduled to take place Jan. 25-31 in Zagreb, Croatia.

In a release sent to the media Dec. 10, the ISU said the World Figure Skating Championships, remains scheduled for Stockholm, Sweden March 22-28, 2021 and the World Team Trophy, remains scheduled for Osaka, Japan, April 15-18. The ISU noted that “the ISU Council would access and re-evaluate the remainder of the 2020-2021 figure skating season, and decide whether, other ISU figure skating events could be organized, if the pandemic situation allows.”

and decide whether, in addition to the World Team Trophy, scheduled for Osaka, Japan on April 15-18, 2021, other ISU Figure Skating Events could be organized, if the pandemic situation allows. 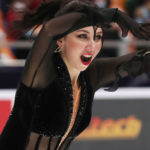