For Alexa Knierim and Brandon Frazier, the World Championships will be the team’s first international competition, concluding their inaugural season together.  Since pairing up in the spring of 2020, the team has saw what has seemed like instantaneous success — winning Skate America in their competitive debut in October and following it up with winning their first national title together in January.

Since the National Championships, Knierim and Frazier said they have been working really hard and have participated in virtual events and competition simulations in Irvine, Calif., where they train with three-time U.S. pair champions Jenni Meno and Todd Sand. Because they were unable to compete at an ISU international event, Knierim and Frazier still needed to attain the minimum technical scores for a short program and free skate in order  to compete at the World Championships. With no in-person competitions, the team submitted videos of their programs in February. Knierim and Frazier earned a 41.67 technical element score for the short program (the minimum required score is 27.00) and a 71.85 technical element score for the free skate (the minimum required score is 47.00). When comparing those scores among the technical scores received among the pairs at the 2019 World Championships, those scores would have had Knierim and Frazier among the top 6 in the world.

“I don’t normally look too much into the scores,” Knierim admitted. “I honestly just skate. I know what the total number is that I’m aiming for.  I did look at the roster of people who qualified and I saw where our scores sat in comparison to others, and I was pleased with it, but I honestly I just focus on the mechanics of it all.”

“Every time we receive marks, I get more and more motivated,” Frazier added. “I’m very pleased to see where our progress is going.”

Prior to Knierim and Frazier obtaining the minimum technical scores to compete at the World Championships, there was some uncertainty if the competition was even going to be held. However, the ISU general council announced in late January that the 2021 World Championships remained scheduled as planned. Still despite the unknowns, Knierim and Frazier said they just prepared as if it was going to happen.

“Throughout the season, we have just been building our partnership. After the U.S. Championships, we had sights set on what was next and the possibility for the World Championships. As an athlete, you just prepared that it (an event) is going to happen until an official statement says otherwise. Everything leading up to this point has been just focused on that it (Worlds) is going to happen and you need to be ready to go,” said Frazier.

“If Worlds didn’t happen, we would just be working and staying in shape to start programs for next season,” Knierim added. “Now that we have had some competitions under our belts, we see where we are and we have big goals and everything is a stepping stone towards them.”

The trip to Stockholm is Knierim’s first overseas trip since the 2019-2020 season when she competed at the Four Continents Championships in Seoul, South Korea in February 2020 with her-then partner, husband Chris Knierim. For Frazier, his last international competition was in November 2019 when he competed at the Internationaux de France with his former partner, Haven Denney. However, during their pre-Worlds call with the media March 11, the team had little reservations about traveling on a plane in the midst of the COVID-19 pandemic and told the media that they would exercise the necessary precautions to keep themselves safe.

“We are going to take extreme precautions during these times. I’m definitely going to wear two masks and follow every protocol we can to stay healthy,” Frazier told the media March 11.

“I’m going to be very mindful of others and make sure I’m doing my duty to keep the people around me safe that are traveling,” Knierim added.  “I’m not too concerned about the travel & the risk only because every time you travel, there is a risk for some potential thing to happen.”

The team traveled to Stockholm with coach Jenni Meno. Given the COVID-19 pandemic, the ISU is permitting skaters and teams to only one coach with them at the event. Knierim and Frazier said it was tough to choose which coach they wanted to have accompany them to Stockholm. So they reverted to the old “pick a name out of a hat” method.

“We love them both,” Frazier said of Meno and Sand. “They are both great.”

Though this hasn’t been a typical skating season, Knierim and Frazier are just ready to step on the ice in Stockholm and make their World debut.

“Training has been going well. We feel like we have been progressing and excelling every week. We have been enjoying the process and we are ready to go,” Knierim exclaimed.

“We are excited to be given the shot to go to the World championships especially with everything going on,” Frazier said. 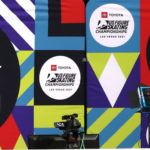 McLaughlin, Brubaker have ‘one of those skates’