STOCKHOLM, SWEDEN — After the placements of the short program at the 2021 World Championships, Team USA pairs saw themselves within reach of trying to obtain three spots for U.S. pairs for the 2022 Winter Olympic Games in Beijing, China. 2019 U.S. champions Ashley Cain-Gribble and Timothy LeDuc and reigning U.S. champions Alexa Knierim and Brandon Frazier sat in sixth and seventh place respectively, which if they were able to solidify those placements following the free skate, those placements would amount to the magic number 13 to earn a third spot. The achievement would give Team USA pairs two more placements than they had for the 2018 PyeongChang Olympics, where Knierim and her husband, Chris, were the sole representatives for the United States in the pairs discipline.

However, that dream goal of obtaining three spots slipped by after the pairs’ free skate, where both pairs’ teams had mistakes in their programs. Knierim and Frazier struggling with their side-by-side triple toe and triple salchow jumping passes in their “Fall on Me” by Andrea and Matteo Boccelli free skate. Knierim also two-footed her throw triple loop.

“I felt like I let down the team,” she told the media, fighting through tears. “I made too many mistakes. I’ve never been more prepared for an event in my whole skating career.”

“There were a couple of things that were a little shakier than normal but overall, I’m happy with how we handled ourselves,” Frazier added.  “It has been a long season –a lot of work for us to build and get out quickly –but I am beyond proud of our first season together. We showed a lot of fight and determination and we did a lot of good things out there.”

Knierim and Frazier finished in 7th place in their world debut as a team. The placement ties Alexa’s highest world placement with Chris from the 2015 World Championships. For Frazier, this marks his best showing at a World Championships, having placed in 12th and 20th place at previous world championships with his former partner, Haven Denney.

Knierim and Frazier said they will go home and start working and preparing for the Olympic season, which will be their sophomore season together.

“Everything needs to continue to grow naturally –the skating, the elements, the technical, the performance side,” Frazier remarked.  “We will get back and start making a list of things to do and what we want to keep striving for.”

“We’re a little disappointed with a few things that happened today,” LeDuc said. “But we’re also encouraged by a few things that we did today. We really love this program, so we wanted to hit it a little bit stronger to showcase what we do well. We’re not going to back down. We’re always going to be pushing ourselves as a team so that we can find the right mix that will help us get to the top.”

Cain-Gribble and LeDuc finished in ninth place, the same placement they had at the 2019 World Championships when they regained the second spot for Team USA pairs.

While there may be some disappointment in their free skate performances, both Cain-Gribble and LeDuc and Knierim and Frazier finished in the top 10 at the World Championships, a feat that hasn’t happened since the 2012 World Championships in Nice, France where Caydee Denney and John Coughlin finished 8th and Mary Beth Marley and Rockne Brubaker finished in 10th place.

LeDuc said while they weren’t able to obtain the three spots, having two teams in the top 10 is really exciting.

“The fact that three spots were part of the conversation is really a testament to the progress we (U.S. pairs teams) have made,” LeDuc added. “We are seeing improvement in U.S. pairs each year, the placements are getting higher and higher. Both teams can be really proud of themselves for pushing themselves and pushing pairs forward. It would have been great to obviously have had the three spots. We really wanted those, but like I said, it (three spots) being realistically apart of the conversation is really exciting. Four years from now, let’s see if we can do it!”

Team USA will have two entries in the pairs competition for next year’s Olympic games. The last time U.S. pairs had three teams compete at the Olympics was 1994 in Lillehammer, Norway. Knierim and Frazier’s coaches, Jenni Meno and Todd Sand, were one of those U.S. pairs teams.

After being crowned the World Junior champions in 2019, Russia’s Anastasia Mishina and Aleksandr Galliamov were crowned world champions in their senior worlds debut. Their “Bohemian Rhapsody” by Queen free skate earned them a ISU personal best free skate score of 151.80 and a ISU personal best total score of 227.59 to claim the gold medal over the reigning World champions Wenjing Sui and Cong Han of China.

“We were really surprised to become first, I don’t know what to say at the moment. We don’t understand it yet,” exclaimed Mishina after the free skate.

Leaders after the short program by just more than two and a half points, Russia’s Aleksandra Boikova and Dmitrii Kozlovskii started of their “James Bond” free skate with side-by-side triple salchows, but then Boikova fell on the throw triple toe loop  and stumbled on the throw triple flip. The mistakes cost the 2020 European Champions the title as they finished fourth in the free skate with 137.47 points, but earned the bronze medal with a total score of 217.63. This is only the team’s second world championship and first world medal.

“Of course we wanted more, aimed for more,” Kozlovskii said. “We were ready, but the ice is slippery. I want to congratulate all who skated here today, it’s a challenge for every athlete.”

Just finishing off the podium are three-time world medalists Evgenia Tarasova and Vladimir Morozov, who finished third in the free skate, but remained in fourth place overall with a total score of 212.76. The team had a solid performance, but Tarasova landed forward in the triple toe, which was the same mistake she made in the short program the day before.

“We were calm. Again we made a mistake in the same element as in the short program, the rest was just another skate, all and all, it was not bad,” said Morozov.

China’s Cheng Peng/Yang Jin finished in fifth place with 201.18 points. After a disappointing short program that left them in 10th place, reigning Canadian champions Kirsten Moore-Towers and Michael Marinaro climbed up the standings to finish in sixth place with a total score of 195.29. The result matched their previous best at the world championships, set in 2018.

“We definitely skated for ourselves today,” said Moore-Towers. “We were excited to show that program and I think that was something that was lacking (Wednesday). I think it showed in our skating.”

“We’re definitely proud of the skate today, considering the circumstances,” added Marinaro. “A very short season, a lot to take away, a lot of lessons learned over the past two months that we can carry into next season.” 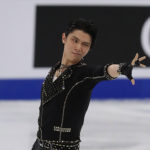 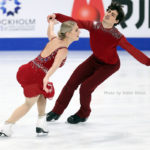